When another person sticks out their tongue at you, it can be flirty, sassy, or just plain rude. But when a cone snail does it, it’s just plain dangerous. The tongue has a small, venomous harpoon that can sting -- and in some cases, the sting can even be fatal. 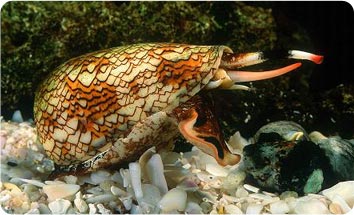 Yet the venom from the cone snail may someday save lives, too. The toxins in cone snail venom are already treating chronic pain, and they may someday be used to treat everything from Alzheimer’s to strokes.

There are more than 500 species of cone snails. Most are found in tropical coral reefs. The biggest can grow to eight or nine inches. Many of them have beautiful shells that fetch good prices.

Some species of cone snail eat fish. They wait until a fish swims within range, then jab it. Toxins paralyze the fish, allowing the snail to reel it in and eat it.

Each species of snail can produce hundreds of combinations of toxins, so there are thousands of combinations in all. Scientists have found that the toxins may be a 21st-Century medicine cabinet for treating many ailments.

A drug approved a few years ago, for example, uses a synthetic version of cone-snail venom to treat severe pain. It’s injected near the spinal cord, and blocks pain from traveling to the brain.

Researchers are developing or testing other medicines based on cone-snail venom. These medicines may someday treat epilepsy, stroke, heart attacks, Alzheimer’s, Parkinson’s disease, and many other afflictions -- medicines from a creature with a sharp tongue.