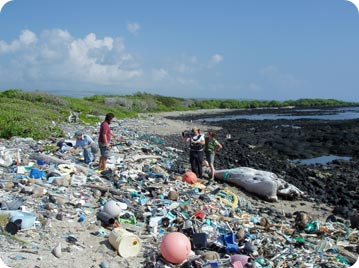 The human affects of polluting and littering on our beaches as seen on this beach in Kamilo Beach, Hawaii. Photo courtesy of Algalita Marine Research Foundation

All three creatures are in big trouble -- and millions more face similar hazards each year, according to some recent estimates. They’re harmed by millions of tons of plastic trash in the world’s oceans. Some of it comes from boats and offshore oil platforms, but most comes from shore.

Plastic is a particular problem because it doesn’t degrade into harmless compounds. It can break apart into smaller pieces, though, and float for decades.

Plastic trash presents a variety of hazards. Many creatures choke when they try to swallow bits of plastic. Marine turtles and mammals can drown when they get tangled in plastic bags or fishing lines. Birds can starve because their stomachs fill with indigestible debris. And smaller creatures can be poisoned by tiny nodules that have absorbed DDT and other toxic chemicals.

The largest concentration of plastic trash is found in the eastern Pacific, traveling along a circular current between Hawaii and the mainland United States. This concentration is bigger than Texas, and it’s known as the Great Pacific Garbage Patch. Thousands of pieces of debris can form big plastic drifts -- helping lure many creatures to their doom.