People sometimes describe themselves as "left-brained" or "right-brained," because the two sides of the brain play different roles in logic and creativity. But dolphins take the two-sided-brain thing to extremes: they sleep with half of their brain still awake. 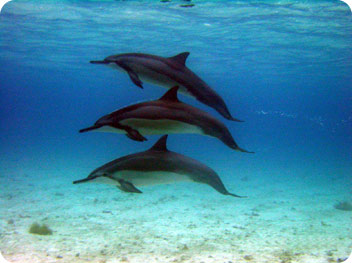 The reason for the difference is the environment. Since people live in the air, we don’t need to consciously control our breathing. When we sleep, we breathe regularly, with no worries about anything clogging up our lungs.

Dolphins and whales live in the water, but they have to come to the surface to breathe, so they consciously control each breath, even while they sleep. If they didn’t, they’d breathe in water and drown.

Yet studies of their brainwaves show that like humans, bottlenose dolphins need about eight hours of sleep a day. Since they have to breathe every few minutes, they can’t just nod off the way people do.

So they sleep with half a brain at a time. One side of the brain goes to sleep, with the eye on the opposite side of the head closed. The other side of the brain slows down, but stays alert enough to watch for predators and know when it’s time to head to the surface for a breath.

Dolphins appear to sleep this way for a couple of hours at a stretch. They do much of their sleeping at night, but appear to be wide awake during the wee hours of the morning, when fish and squid come to the surface to feed. Then the dolphin can catch a hearty breakfast after a good night’s sleep.