Most of the time, the blue-ringed octopus is rather ordinary looking. It’s no more than a few inches long, and its body is colored in shades of brown, beige, or yellow. 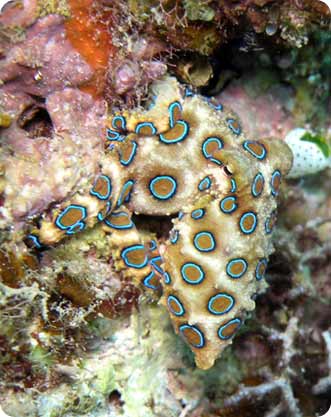 But every once in a while, vibrant blue rings blossom all over its body and tentacles. It’s a beautiful sight, but one you don’t want to see up close and personal. It means the octopus is ready to attack. And despite its tiny size, the blue-ringed is the deadliest of all species of octopus. It can paralyze and kill an adult human in minutes.

The blue-ringed octopus is found in shallow waters around Australia and other regions of the Pacific and Indian Oceans. It lives in tidal pools, or under rocks that are just offshore.

The octopus has two poison glands that inject neurotoxins into its saliva. The toxins are produced by bacteria. One gland contains a milder version of the toxin that’s used to stun and kill its prey -- usually small crabs. The other gland produces a deadlier form of the toxin for defense.

When the octopus faces a threat, its blue rings flare brightly, like little neon signs flashing danger! Its beak can easily break through skin or a wetsuit, injecting its toxic saliva. The victim’s muscles and respiratory system can become paralyzed within minutes. Without treatment, the victim soon dies. There’s no antidote, but artificial respiration can keep the victim alive until the toxin is cleansed from the system.

So if you ever come across a little octopus with vibrant blue rings, heed its warning -- just stay away.