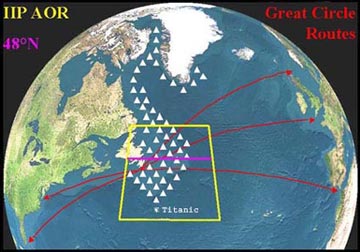 The northwestern corner of the Atlantic Ocean is a danger zone. The shipping lanes are crowded, the weather can turn violent, and dense fog covers the Grand Banks off the coast of Newfoundland. And then there’s the most famous menace of all: icebergs. These islands of ice have claimed hundreds of ships, from fishing boats to the Titanic.

Today, though, ships have plenty of warning about icebergs, thanks to the International Ice Patrol. Operated by the Coast Guard, it tracks just about every piece of ice that enters the North Atlantic shipping lanes, and sends out regular warnings and charts.

The patrol was established in 1914, after the outcry over the loss of Titanic two years earlier. With the exception of the war years, it’s operated every year since.

Icebergs break off the glaciers that cover Greenland. The Labrador Current carries them along the coast of Canada and into the Atlantic. The bergs melt when they enter the warm waters of the Gulf Stream.

The ice patrol sends out reconnaissance flights beginning in February, and continuing until the last of the year’s icebergs disappears. Flight crews use radar to track large icebergs, and their own eyes to detect bergs whose above-water portions are smaller than a VW Beetle.

The patrol covers about a half-million square miles — generally as far south as the latitude of New York City. Its results are supplemented by reports from ships and other aircraft.

The ice patrol saves lives every year — an unsinkable legacy for the Titanic.