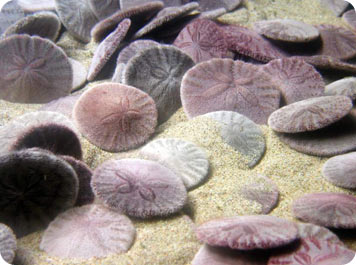 If you ask beachcombers to name their favorite shell, most are likely to tell you it’s the sand dollar. It’s a thin disk that’s usually no more than an inch or two across — a shape that resembles an old dollar coin. A pattern on one side of the disk looks like a flower with five petals.

But the expired sand dollars that people like to collect aren’t shells at all. Instead, they’re skeletons — technically known as tests.

Small tubefeet line grooves in the bottom side, and carry food to the mouth — microscopic plants and animals, the larvae of shellfish, and bits of dead organisms that drop to the bottom.

One species off the West Coast does its eating while standing up. It uses its spines to anchor one end and push itself upright. It then grabs food particles as they float by.

Sand dollars like shallow waters, not far below the tide line. And they can congregate in bunches — up to 600 or more in a square yard.

When a sand dollar dies, its flesh quickly decomposes or gets eaten by smaller organisms. When a skeleton washes onshore, it’s bleached white — ready to join the collection of some happy beachcomber.