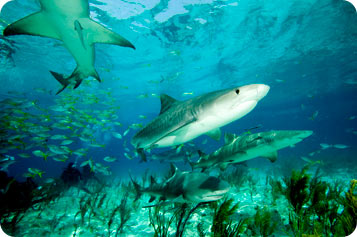 It takes a lot of food to keep a tiger shark going. It’s one of the giants of the sea — a typical adult is about 10 feet long and weighs half a ton. And a really big one can be twice that size. What’s more, a tiger shark is active — it expends a lot of energy every day.

It’s not surprising, then, that tiger sharks will eat just about anything that paddles, jets, or wiggles through the water. Their diet includes fish, seals, squid, sea turtles and snakes, rays, and even other sharks. But the buffet doesn’t end there.

Tiger sharks are found in shallow coastal waters around the world. They especially like to patrol murky bays and estuaries, where their keen eyesight and sense of smell help them sneak up on unsuspecting prey.

But coastal waters also contain lots of manmade junk. Garbage washes out to sea in rivers and streams, it’s dumped there on purpose, or it accidentally falls off boats or oil rigs. The aggressive tiger shark sees much of this debris as snacks.

So over the years, a lot of interesting stuff has been found in the stomachs of tiger sharks. License plates are common, along with bottles, cans, plastic containers, and even chunks of tires. One shark had swallowed two burlap bags, another had downed a set of deer antlers, and yet another had a chicken coop with bones and feathers still inside. And when it swallows too much junk, the shark does the same thing that kids do: it throws it up.

This big appetite has earned the tiger shark a nickname: the garbage can of the sea.