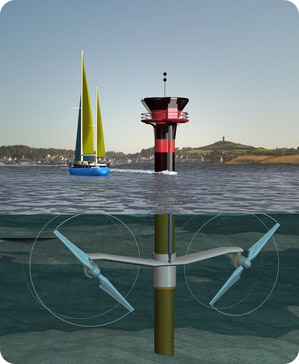 As you stroll along a tropical beach, you’ll notice the rippling of the waves, the warm touch of the water, and perhaps the slow rise and fall of the tides. It’s all gentle and relaxing. But there’s great power behind those quiet processes — enough to supply most of the energy needs for the entire planet.

A few places are already generating electricity from ocean tides. The tides ebb and flow every day, moving enormous amounts of water. This motion can turn turbines that generate electricity — the same process that powers hydroelectric dams.

In fact, today’s tidal power plants use dams that are similar to those across rivers. One of the biggest is in the Bay of Fundy in Nova Scotia, where the water level can vary by 50 feet. The power plant produces around 20 megawatts of electricity — enough to power several thousand homes.

But dams can trap aquatic life and alter the natural flow of the tides. So engineers are developing a new technology that’s less invasive: underwater turbines. They look and operate like wind turbines, but they’re completely submerged. They don’t change the flow, and they’re less harmful to wildlife. New York City is testing six turbines in the East River, and Washington State is planning tests in Puget Sound.

Eventually, similar turbines may be placed in currents like the Gulf Stream. These currents never stop or slow down, so they could provide thousands of megawatts — non-stop power from the sea.

More about ocean power on our next program.