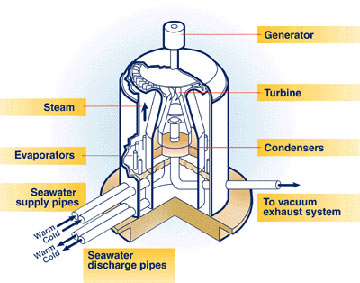 The oceans could someday supply enormous amounts of electricity — and it could be as simple as turning on the hot and cold running water.

The process is called ocean thermal energy conversion. It takes advantage of the fact that at tropical latitudes, there’s a big difference in temperature between water at the surface and a few thousand feet down. The warm surface water can drive turbines, while the cold deep water can keep the cycle going.

The concept works like this. Warm water is pumped into a chamber in which most of the air’s been pumped out. The water evaporates to form steam. The steam turns a turbine, which drives an electric generator. After its work is done, the steam is passed through pipes that are surrounded by cold water from the deep ocean. That causes the steam to cool and condense. The salt is left behind, so the process can also produce fresh drinking water.

There are several variations on the idea, but they all work in basically the same way. Some test rigs have been built in Hawaii, and they’ve produced small amounts of electricity. But it’s likely to take decades to make the process economical enough for everyday use.

Another long-term technique may use the other main ingredient of seawater: salt. There’s a difference in pressure between layers of freshwater and saltwater. A membrane between them could extract energy from this pressure difference. The technology is in its infancy, but there’s hope that it could someday provide clean power across much of the world.