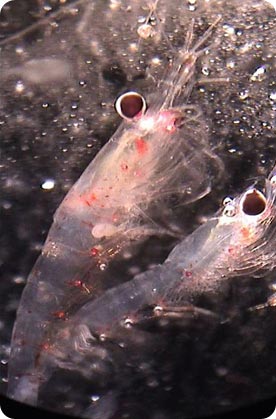 On warm summer days, the waters around Antarctica can explode in a feeding frenzy. Whales leap from the water, penguins plunge in like black-and-white torpedoes, and birds hover by the thousands. The cause of all this activity is a small creature that’s one of the most important food sources in the oceans: krill.

Krill are small crustaceans that look like shrimp. They’re found in oceans around the world, from the tropics to the frigid waters of higher latitudes. They’re especially abundant in the Antarctic, where they’re the main food source for many fish, birds, and mammals.

The Antarctic krill grows to about two inches long, and weighs in at around a gram. And if it doesn’t get eaten, it can live five years or longer.

Most of the time, krill stay well below the surface during the day, to hide from predators. They rise close to the surface at night to feed on phytoplankton — microscopic plants that form the first link in the ocean food chain.

Krill typically congregate in giant swarms. There can be thousands of krill in a cubic yard of water, and the swarm can span hundreds of feet. A swarm is like an all-you-can-eat buffet for penguins, seals, fish, squid, and whales. In fact, a whale can eat several tons of krill in a single day.

But there’s evidence that since the 1970s, the amount of krill in the Antarctic may have dropped by 80 percent, perhaps as an indirect result of global warming. That weakens a critical link in the food chain -- and could make the mass feedings a lot less frenzied.