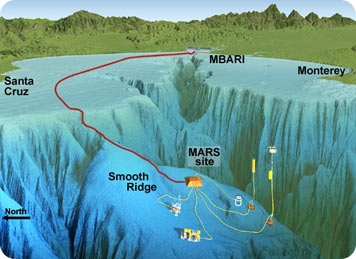 A 3-D perspective of the MARS observatory site on Smooth Ridge, at the edge of Monterey Canyon. Credit: David Fierstein Copyright 2004 MBARI.

A new Mars rover is about ready to study an alien landscape. Instead of cold, orange, and dusty, though, this landscape is cold, black, and sludgy — the bottom of Monterey Bay off the coast of California.

The rover is called the Benthic Rover — benthic meaning bottom of the ocean. It’s one of five experiments that’ll be supported by MARS -- the Monterey Accelerated Research System.

MARS is the hub of an underwater observatory that’s being developed by the Monterey Bay Aquarium. It’s at the end of a 32-mile cable that will supply power to the experiments, and carry their observations back to shore. The observatory is about two-thirds of a mile down, near the edge of a canyon.

The MARS instruments will provide round-the-clock readings on ocean currents, microscopic life, and underwater tremors. They’ll also look for the glow of organisms that produce their own light in the dark ocean depths.

Benthic Rover, which is about the size of a riding lawnmower, will conduct a series of tests on the ocean-floor sediments. It’ll measure their chemical composition, look for burrowing worms, and make other tests. After three days of probing a single spot, it’ll gently crawl to its next location.

The rover’s main goal is to study how carbon is cycled in the deep ocean. Another goal is to determine how bottom-living organisms survive in a region where food is limited and the nutrients come from marine snow -- a shower of dead organic matter from above. It’s an environment that may not be Martian, but it sure is alien.