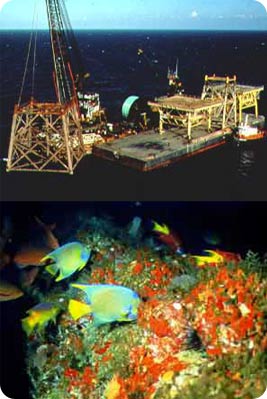 The bottom of most of the Gulf of Mexico is a featureless plain coated with mud. There’s no hard surface for corals or other bottom-dwellers to latch on to. But a few thousand busy habitats do spring from the muddy bottom. They’re like marine versions of high-rise apartments, bustling with life from bottom to top: oil platforms.

Barnacles, mussels, corals, and other shelled creatures attach themselves to the heavy piers and support beams. That attracts fish of all varieties, which in turn attract birds and turtles, establishing a vibrant oasis of life.

Some platforms are converted into permanent reefs after their productive days are over — about 200 of them so far. Some have their tops chopped off, others are knocked on their sides, and still others are towed away and sunk in different locations.

These artificial reefs are popular with divers and sport fishermen. But some scientists are concerned that instead of forming pods of new life, they’re just pulling existing life from natural habitats.

A similar rigs-to-reefs debate is going on in California, where about a dozen of the state’s offshore platforms are due for retirement. There’s plenty of natural habitat around the rigs, but they tend to have less-abundant life. Part of that is because of overfishing, but some people are concerned that fish just move to the rigs because there’s more prey and better hiding places — altering the natural ecosystem.

Whatever the outcome, existing rigs will remain vibrant oases of life — wherever they are.