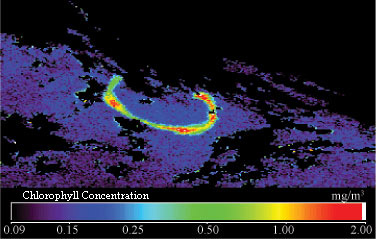 A good way to get strong and healthy is to pump iron. And there’s some evidence that pumping a little iron into the oceans could make the environment stronger and healthier, too.

The microscopic plants that float at the top of the oceans, known as phytoplankton, take carbon dioxide that’s entered the ocean from the atmosphere and incorporate it into their bodies. When they die, they sink deeper into the oceans, where they can lock up the carbon for decades or centuries. And some of them fall to the bottom, where the carbon can be locked up for millions of years.

But large expanses of the oceans have little or no phytoplankton, even though they may have plenty of nutrients and sunlight. The missing ingredient appears to be iron, which helps the phytoplankton grow.

Scientists have sprinkled iron dust across regions of the Pacific and Southern oceans. In most of the tests, phytoplankton began to bloom like crazy. But there were mixed results on how much carbon dioxide they held onto; many of the organisms were gobbled up by small animals, which released the carbon dioxide right back into water, where it then re-entered the atmosphere.

Some companies are looking at iron seeding as a way to offset some of the carbon that industry releases into the air. But scientists are still unsure of how effective the technique is. They’re also concerned that it could cause more problems than it cures. So many are suggesting that we learn more about the possible aches and pains before we pump iron.