Anemones are some of the most beautiful creatures in the sea. Masses of tentacles atop their bodies look like flower petals, waving gently in the currents. And they group together in colonies, spreading color across the ocean floor. 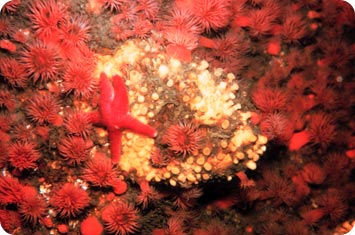 But the tranquil view can be misleading. Colonies can include “warriors” whose job is to keep other colonies from encroaching on their turf. As a result, colonies are separated by narrow strips of open ground -- underwater demilitarized zones.

Anemones inhabit warm, shallow waters around the world. Most are only a few inches across, but some can span up to six feet. They have “stingers” on the ends of their tentacles to stun passing fish, which they pull into the mouths at the top of their barrel-shaped bodies. About the only species that’s immune to the sting is the clownfish, which hangs around the tentacles for protection.

Anemone colonies are made up of clones -- genetically identical copies of a single organism. So each colony is like a big family.

But the members of the family aren’t quite the same. Some are specialized for reproduction. Others are the warriors. They inflate their tentacles, which are tipped with special stingers that harm other anemones.

Recent lab tests show that occasionally, one colony will send a scout into the DMZ. Warriors in the next colony can stretch and bend their bodies to reach over other anemones and sting the potential invader. All of this happens at a slow pace. But it keeps each colony at home in its own colorful patch of the ocean floor.