NEWSREEL: A brilliance of 500 Suns lights hundreds of miles of the Pacific, and the force of a million tons of TNT is released. 15 seconds later, the light is still unbearable. 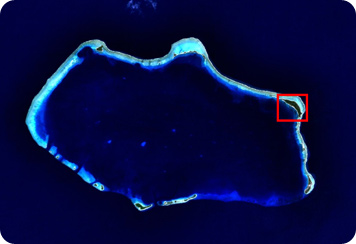 Bikini Atoll, with Bikini Island boxed in the northeast. The crater formed by the Castle Bravo nuclear test can be seen on the northwest cape of the atoll. Credit: http://en.wikipedia.org/wiki/File:BikiniIsland.png

The nuclear bomb known as Bravo was the most powerful ever exploded by the United States. On March 1st, 1954, the 15-megaton weapon vaporized three islands in the western Pacific. They were part of Bikini atoll -- a ring of islands enclosing a lagoon that’s as big as Chicago. The blast gouged a crater more than a mile wide and 250 feet deep.

Yet today, the bottom of Bravo crater is a scene of vibrant life -- and so is the rest of the Bikini lagoon. Some types of coral grow as tall as three-story buildings, while others have trunks that are up to a foot across. In places, corals cover 80 percent of the bottom -- all free from contamination.

The U.S. exploded a series of atomic weapons at Bikini atoll during the 1940s and ’50s. Today, the islands are still too “hot” for full-time occupation. But the lagoon has become a popular site for divers. They explore the remains of ships that were sunk in the explosions.

And last year, researchers reported that an explosion of corals has filled the lagoon. Although some species have disappeared -- probably from the bombs or from lingering radiation -- others have taken their place -- perhaps carried by water currents from healthy atolls. And since there’s little human activity in the lagoon, Bikini could remain a vibrant habitat for corals and other marine life.