The deepest spot in the Atlantic isn’t way out in the middle of the ocean, as you might expect it to be. Instead, it’s close to the edge -- a narrow canyon north of Puerto Rico known as the Puerto Rico Trench. A long segment of it bottoms out at a depth of more than five miles. 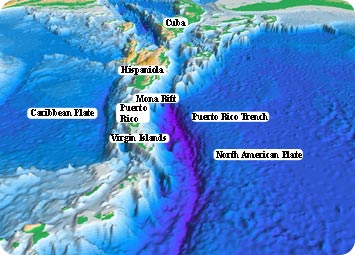 Sea floor topography of the Atlantic Ocean and the Caribbean Sea. The purple sea floor at the center of the view is the Puerto Rico trench. Credit: Woods Hole Science Center/US Geological Survey.

Trenches like these are quite common in the Pacific. In fact, the deepest point in all the oceans is the Mariana Trench, near Japan, with a depth of more than seven miles. But there are only two trenches in all the Atlantic.

Trenches form along the boundaries between the tectonic plates that make up Earth’s surface. One plate can dive beneath another, forming a deep trench where they intersect.

The Puerto Rico Trench is at the intersection between the Caribbean and North American plates, which are sliding past each other at about an inch a year.

The trench itself stretches more than a thousand miles along the ocean floor, from near Hispaniola to north of Puerto Rico and the Virgin Islands. But no one has ever journeyed to the bottom of the trench. And only in the last few years have researchers used sonar to compile good maps of it.

The sonar observations show that a fault line runs along most of the length of the trench. It’s similar to the San Andreas Fault in California. And that makes it dangerous. Several deadly earthquakes and tsunamis have been recorded in the region over the centuries. And there’s a good chance that more will follow -- dangerous tremors from the bottom of the Atlantic.