Just about everything in the oceans is hunter, hunted, or both. But in the early 20th century, a hunter in the Atlantic turned a fish in the Pacific into one of the most hunted on the planet. 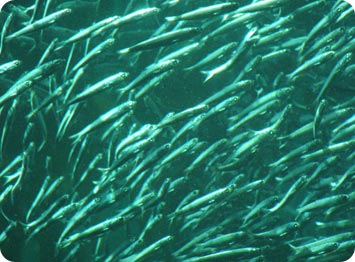 The hunter was the German U-boat. The fishing industry on the East Coast shut down as boats stayed in port to avoid the submarines. So a hungry nation looked to the Pacific Ocean. And there, the fleets brought in a staggering bounty of Pacific sardines.

Sardines are found all around the world. In fact, the name “sardine” probably comes from the Mediterranean island of Sardinia. Most species of sardine are fairly small. But they can spawn several times a year, so they build big populations in a hurry.

And in the Pacific, the number of sardines was staggering. In 1936 alone, fishing fleets brought in more than 700,000 tons of them -- a quarter of all the fish caught in the entire United States. The sardines were packed at canneries like those commemorated in John Steinbeck’s novel “Cannery Row.”

But overfishing and a change in ocean temperatures caused the sardine population to collapse. The canneries closed, and fishing was banned.

In recent years, though, the industry has rebounded, and the annual take has topped a hundred thousand tons. Most of the fish are processed overseas -- either canned or ground up to make fishmeal.

Sardines have lost most of their popularity in the U.S. But because they’re high in omega-3 fatty acids, fresh sardines are starting to catch on -- this time without any help from U-boats.