The law of the jungle applies to the oceans just as much as the land: It’s eat or get eaten. And the difference often depends on one factor: speed. The creatures that are fast enough catch another meal -- or keep themselves from getting caught. 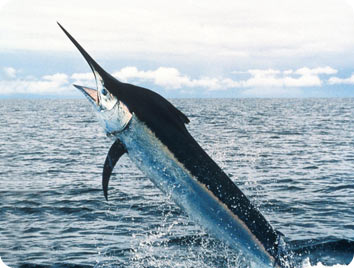 The oceans are full of speedy fish. The blue shark can zip along at a good 25 miles an hour, and perhaps faster. A tuna can clock in at around 30 miles an hour, while the dolphinfish might top out at 50.

But the fastest swimmers of all are billfish -- torpedo-like fish with long, spear-like bills. Their streamlined bodies slice through the water with ease, and their tails generate tremendous power.

The champion of the group is the sailfish. In short bursts, it can reach speeds of almost 70 miles an hour.

The sailfish is one of the most popular sportfish in the oceans. It’s topped by a long, tall dorsal fin that looks like a sail.

Sailfish are found around the world. The Atlantic version grows up to around eight feet long, and weighs a hundred pounds or more. It’s especially common in the Gulf of Mexico, the Caribbean, and off the Atlantic coast of Florida. Pacific sailfish are a little longer and heavier.

Sailfish use their big fins to “herd” their prey. Several fish work together to corral large schools of fish. They take turns slicing through the “ball” of food they’ve created.

When a sailfish needs that extra burst of speed, though, it folds the sail into a groove in its back. This sleek profile helps make it the fastest known swimmer in the oceans.