When European explorer John Cabot neared the coast of Newfoundland in 1497, he saw so many fish churning the waters that you could practically walk on them. And for the next five centuries, European and American fleets scooped up those fish by the shipful: herring, halibut, haddock, and others, but mostly Atlantic cod. 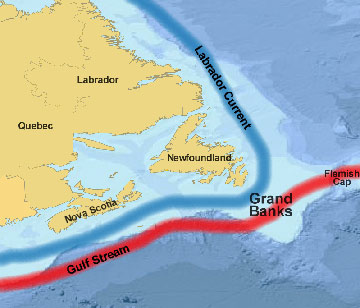 They found this bounty in the Grand Banks, one of the most storied regions of the Atlantic Ocean.

It covers about 50,000 square miles off the east coast of Canada, and its waters are no more than a few hundred feet deep. The Labrador Current flows southward along the coast, pushing nutrients toward the surface. Microscopic plants bloom in abundance, attracting fish and mammals, and creating one of the richest fisheries in the world.

The hauls were so large that fishing vessels were willing to brave some of the worst weather in the Atlantic. The convergence of the cold Labrador Current and the warm Gulf Stream creates dense fog. Icebergs can plow through the Banks. And “nor’easters” can spawn fierce storms like the one depicted in the movie “The Perfect Storm,” which was based on the true story of the fishing boat Andrea Gail.

But overfishing has decimated the Grand Banks. By the mid 1990s, the cod population had crashed, and most commercial fishing was banned. Some of the fisheries have rebounded a bit in recent years. But many scientists doubt whether the Grand Banks will ever again support the abundance of life that drew fishing fleets to fortune and doom.