If you’re not a fan of anchovies, then the Pacific Coast of South America isn’t for you. A large fraction of the world’s anchovies are caught in the cold waters off Peru and Chile. They’re sustained by an ocean current that creates the most productive fisheries in the world. 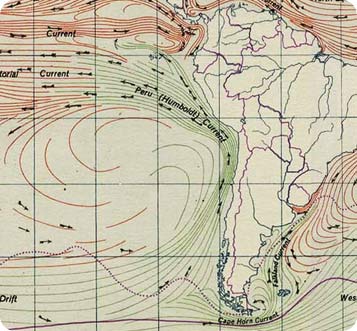 The Humboldt Current flows northward along the continent’s edge. When it runs into the steep continental shelf, it dredges up cold, nutrient-rich water from the ocean floor and brings it to the surface. The nutrients support abundant microscopic life, which in turn supports a chain of ever-larger creatures.

Sea turtles, sea lions, and sea birds are common. So are giant squid -- fishing vessels reel in tens of thousands of tons of them every year. And a couple of species of penguins are found there, too.

The most common fish are anchovies, sardines, and mackerel. On average, the fleets bring in several million tons of them a year -- up to one-fifth of all the fish caught in the entire world.

The fisheries have held up pretty well despite increasing pollution and possible overfishing. But one thing can decimate them: El Niño. Its warm waters -- which bring rains to the American southwest -- prevent the Humboldt Current from rising to the surface. When that happens, the number of fish plummets. And it can take years for the fishery to recover.