The west coast of Tasmania is raw and wet. Gale-force winds commonly buffet the island, which can get up to a hundred inches of rain a year. 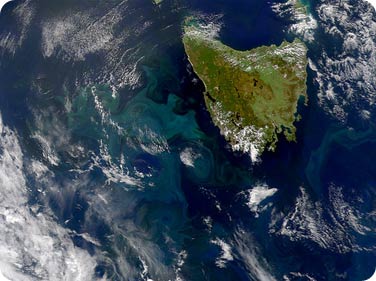 Tasmania takes a pounding because it’s off the southern coast of Australia, in what’s called the Roaring Forties -- the nickname sailors gave latitudes between 40 and 50 degrees south. This band has some of the strongest sustained winds on the planet. In fact, about the only zone that can top the Roaring Forties is the next band southward: the Furious Fifties. The high winds take shape as warm air near the equator rises and moves toward the south pole. As the air currents reach the middle latitudes -- the forties and fifties -- they sink back toward the surface. They’re deflected eastward by Earth’s rotation, creating strong winds known as westerlies.

The same thing happens on both sides of the equator, so westerlies blow here in the northern hemisphere, too. But in the north, these winds have to cross the full width of North America, Europe, and Asia. That slows them down.

In the southern hemisphere, there’s little land to block the westerlies -- the tip of South America, New Zealand, and a sliver of Australia. The least amount of land is in the fifties, so the winds there can be even stronger than in the forties.

At times, the westerlies can be fairly calm. At other times, though, they carry storms with hurricane-force winds -- making the Roaring Forties and the Furious Fifties some of the most fearsome waters on Earth.