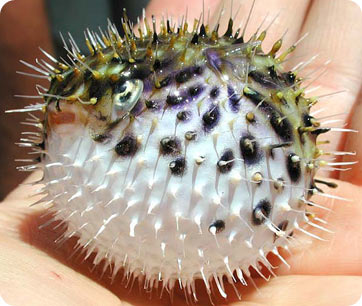 Balloon fish puff up like balloons to protect themselves from predators. Credit: National Oceanic & Atmospheric Administration

Fish have many ways to protect themselves from predators. Some use their color and texture to blend into the background. Some dig into the mud at the ocean floor. And some are so fast they simply jet away.

And one species uses a bit of bluster: It puffs up like a balloon to make itself look more impressive. If that doesn’t work, it’s covered in sharp spines that give attackers a nasty surprise.

Not surprisingly, this species is known as the balloonfish. It’s found in warm, shallow coastal waters around much of the world, usually in coral reefs, mangrove forests, and seagrass beds. A typical adult is around a foot long, with a body shaped a little bit like a football -- a round cross-section, and tapered at both ends.

During the day, a balloonfish hides in caves or under outcroppings. It comes out at night to feed, using its large eyes to see through the dark waters. Its teeth are fused together to form a structure like a hard beak, which it uses to crack open the shells of clams, snails, hermit crabs, sea urchins, and other bottom dwellers.

Although the balloonfish is a pretty fast swimmer, its first line of defense is the ability to puff itself up. It takes in so much water or air that it swells to about three times its normal diameter, so it’s about as wide as it is long. And when it puffs up, special scales stick up to form sharp spikes all over its body. That’s enough to deter most predators, who let the comical-looking balloonfish drift along in peace.