It’s almost not fair. The top predators in the oceans -- great white sharks and some of their kin -- have an extra sense to help them find and track prey: the ability to detect the tiny electrical fields that are generated by all living organisms. 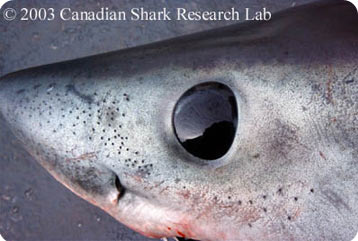 The ampullae of Lorenzini are the small pores around this sharkís snout. Credit: 2003 Canadian Shark Research Lab

Most sharks have keen senses that allow them to track prey, predators, and mates at varying distances. At close range, they also rely on a network of sensors known as ampullae of Lorenzini, named for the Italian scientist who discovered them more than three centuries ago.

The network consists of hundreds or thousands of pores on the shark’s head that are big enough to see with the naked eye. The pores open onto canals that are lined with small hairs like those inside the human ear. Each canal leads to a small gel-filled chamber -- the ampulla -- that’s lined with nerve cells.

These organs detect the electrical impulses generated by the muscle contractions of nearby fish, seals, or other creatures. They’re so sensitive that they can even detect a beating heart. But they only work at close range -- within a few inches. That helps the shark keep its prey in the crosshairs for its final attack. It even helps the shark find fish that have buried themselves in the sand.

The ampullae of Lorenzini may play other roles, too. They may help sharks follow water currents, for example. And they may serve as an internal compass, helping sharks navigate across hundreds or thousands of miles of open water by following Earth’s magnetic field.