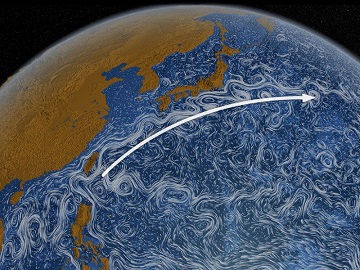 For most of us in the United States, no ocean current is better known than the Gulf Stream. It begins in the Gulf of Mexico, flows up the eastern seaboard, then crosses the Atlantic to Europe. Its warm waters help regulate temperatures across two continents.

There’s an equivalent current in the western Pacific Ocean as well. It flows past Taiwan and along the eastern coast of Japan before turning toward the Pacific. It’s known as the Kuroshio Current. The name is a Japanese word that means “black stream.” That’s because the current is much darker than the surrounding waters — the result of lower amounts of organic material at the surface.

The Kuroshio is the biggest current in the western Pacific. It begins off the coast of the Philippines, where a current that flows westward across the Pacific splits in two. The Kuroshio forms the northern branch. It travels almost 2,000 miles before it begins moving away from land.

The current is strongest from May to August, with a smaller surge in winter. A recent study found that at its peak, it can be up to 50 miles wide, and flow at three or four miles per hour. Its average surface temperature is about 75 degrees Fahrenheit — several degrees warmer than the surrounding ocean. That helps keep southern Japan relatively warm.

Over the centuries, the Kuroshio has carried many ships away from Japan. An extension of the current has then ferried some of them to Hawaii or even North America — a journey that began in the Gulf Stream of the Pacific.