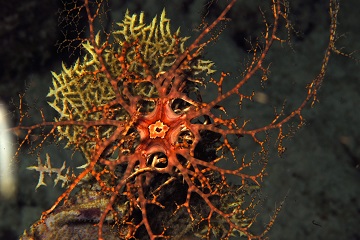 A trip to the grocery store usually requires a basket to hold all the goodies. But a relative of the well-known sea star doesn’t need to grab a basket to hold its groceries — it already has one.

The basket star is found in cold to warm waters in both the northern and southern hemispheres, generally at depths of no more than a few hundred feet. It’s found on the west coast of the United States down to California, and on the east coast down to Massachusetts. It prefers a rocky sea floor, in a spot with a pretty strong current.

The basket star has a five-pointed body that’s up to a few inches across. An arm extends from each point. Unlike your average sea star, though, a basket star’s arms quickly branch out. Each arm may have two main branches, with many smaller ones extending from each of the bigger ones. And the branches have their own sub-branches, with small barbs on the ends. In all, an arm may be up to a couple of feet long.

The basket star feeds by anchoring itself to the sea floor and extending its arms into the current — forming a wide basket. Small shellfish, jellyfish, and other critters that float with the current flow right into the basket. The barbs trap the unfortunate prey, encase it in strands of mucus, then pull it down to the basket star’s mouth.

And if the basket star should turn from predator to prey, it can wrap its arms around its body to form a tight ball. That may keep the basket star from finding itself a tasty morsel in some other creature’s grocery basket.