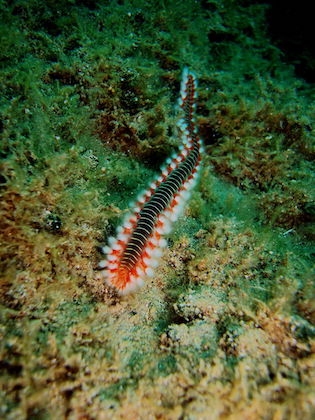 The bearded fireworm has tiny bristles on its flanks can inject a powerful neurotoxin. Credit: Wikipedia/public domain.

Marine creatures don’t have to be big to deliver a nasty jolt. Consider the bearded fireworm. It’s generally no more than a few inches long, but one touch can be a big problem. Tiny bristles on its flanks can inject a powerful neurotoxin. The site of the wound feels like it’s on fire — a sensation that can last for hours.

The bearded fireworm is found in warm, shallow waters in and around the Atlantic Ocean, including the Gulf of Mexico. It looks a bit like a fuzzy caterpillar. Its body can be green, orange, or other bright colors, and small tufts of white bristles line its sides, creating the “fuzzy” appearance.

It generally hides in cracks or under rocks during the day, then comes out at night to feed. It often eats the remains of dead organisms, but can gobble up small living organisms as well. One of its favorite foods is coral. It clambers to the end of a small branch, covers up the top couple of inches, and eats the living tissue right off the skeleton.

Like many ocean creatures, fireworms sometimes light up. When they come to the surface to mate, the female produces an enticing green glow. The male responds with flashes of light.

Most of the time, the fireworm gently scuttles across the ocean floor. When it’s disturbed, though, it flares out its bristles, forming a protective halo. Anything that ignores the bristles receives a painful sting. Not only does it feel like the wound is on fire, but the venom can sometimes cause dizziness and nausea — a nasty jolt from a tiny creature.