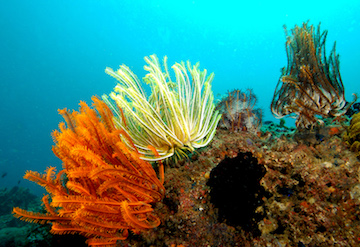 Feather stars were once one of the most common animals in the oceans. Credit: Steve Herrick

If you happen to be snorkeling in the Indian Ocean some day and you come face to face with what looks like a feather duster, leave it in peace. It’s not trash; it’s a feather star -- a creature that’s related to sea stars.

Like a sea star, it has five arms. But the arms can have many branches -- up to 200 in all. And, the branches are covered with delicate appendages that make them look like feathers.

Feather stars are found in all the world’s oceans, in both shallow and deep waters. They’re most common, though, in the Indian and the western Pacific oceans. They consist of a cup-shaped body; small “legs” that can grab on to corals, the ocean floor, or other solid objects; and the feathery arms. The arms come in a variety of colors, from black and white to yellow, orange, and red. And they’re detachable; the feather star can drop an arm to help it escape a predator, and the arm grows back.

The arms have small tube feet that are coated in a sticky mucus. The feet snatch tiny organisms and bits of dead matter from the water. They drop each morsel into a groove in one of the arms. Tiny “hairs” in those grooves then carry the food down to the mouth.

There are more than 500 species of feather stars today. But hundreds of millions of years ago, there were more than 5,000 species of feather stars and their relatives. In fact, they were one of the most common ocean animals around, so they left abundant fossils in rock beds -- evidence of beautiful “feather dusters” sweeping through ancient oceans.