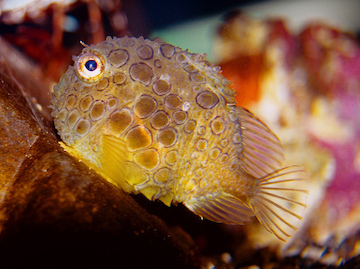 As its name might suggest, the lumpsucker isn’t the most attractive fish in the ocean. It’s shaped like a ball, and it has a “sucker” on its stomach that it uses to attach to rocks and kelp. Many species have lumpy, spiny skin. And they’re not great swimmers -- they lurch about with little control over where they’re going. Yet they may have a future in the cleaning business.

There are about 30 species of lumpsuckers. The smallest are found in the northern Pacific Ocean and the Bering Sea. They’re only an inch or two long. Species found in the north Atlantic Ocean are much bigger -- up to about a foot and a half long.

Lumpsuckers aren’t really designed for swimming. Their round bodies aren’t streamlined, and they have small, short fins, so it’s hard for them to control direction. And they don’t have a swim bladder, the organ that allows other fish to easily control their depth. So when a lumpsucker flees from danger, it staggers.

One of the most interesting things about lumpsuckers is that the males look after the eggs. In fact, a male may spend up to two months with the eggs, chasing away predators and fanning his stubby fins to keep oxygen circulating over the eggs. When they hatch, though, dad’s out of there in a hurry.

Lumpsuckers eat small, slow organisms, like worms and small shellfish -- and sea lice. In fact, fish farmers in Europe are using lumpsuckers to clean the lice off salmon grown in captivity. So while the lumpsucker may not be pretty, it could be pretty useful.