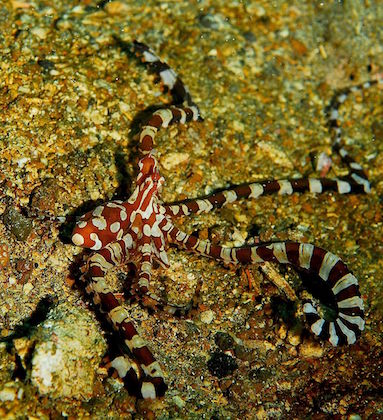 The right name can make all the difference in a marine organism’s reputation. Few, for example, could resist Wunderpus photogenicus -- the “photogenic wonderful octopus.” It has a reddish-brown body marked by patterns of white stripes and spots. And it can contort its body to resemble other creatures.

Wonderpus is found around the western rim of the Pacific Ocean, southward from the Philippines. Its body is only a few inches long, while its arms can span more than a foot.

The markings on the little octopus may be unique to each individual, like fingerprints. The markings don’t change, although the intensity of the colors can vary when Wonderpus is threatened.

It’s been observed to mimic several other creatures -- a sea snake, a spiny lionfish, a venomous species of octopus, and others. That’s probably to warn off potential predators, although biologists haven’t studied its behavior in detail.

Wonderpus lives in burrows in the sand. It digs them itself or takes them over from other creatures. It comes out to feed during twilight -- dawn and dusk. It sometimes uses its arms to poke around for food in holes and cracks. But it also spreads its arms over a patch of the sea floor, then extends webs from the arms, trapping anything on the bottom or buried in the sand. The octopus then uses the tips of its arms to scoot small fish or shellfish toward its mouth.

Not surprisingly, Wonderpus is a favorite of divers and photographers -- a wonderfully photogenic model at the bottom of the sea.