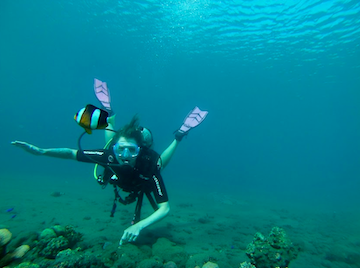 Tropical cyclones are a fact of life on the islands of southeast Asia. Among other things, they can damage reef systems that attract divers and other tourists, harming local economies. How people and institutions handle that challenge can determine how quickly they recover.

This idea is known as adaptive capacity. It’s the ability to absorb shocks, recover and learn from them, and apply those lessons to make things better.

Kelly Dunning, a researcher at the University of Texas Marine Science Institute, studied adaptive capacity in southeast Asia. In particular, she looked at different ways of managing Marine Protected Areas, where coral reefs and other resources are protected from most human activities. Diving and other tourist activities are allowed, though.

In Malaysia, she found a system that was tightly controlled by government managers. Such agencies were slow to adopt new ideas. After big storms, they were slow to clean up and to repair moorings and other infrastructure. That depressed the tourism business.

On the Indonesian island of Bali, though, she found a system that was managed mainly by locals -- people who ran diving operations, hotels, and others affected by the environment. They set up a system in which everyone shared responsibility for repairing storm damage. They also set up artificial reefs, including some with models of local temples and gods. The reefs helped attract fish and other marine life, and were popular with visitors -- adapting to change in the ocean.