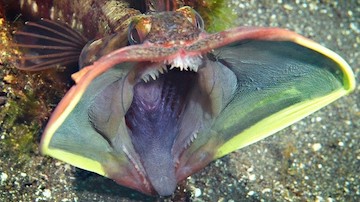 If you really want to see “jaws,” forget about great white sharks. Instead, look for the sarcastic fringehead. It’s a little fish -- no more than a foot long. But the male fringehead can spread his jaws wider than the length of his body. And it’s not just for show. He’ll attack just about anything that enters his territory.

The sarcastic fringehead gets its name from its behavior and its appearance -- it’s aggressive and fearless, and it has little filaments above its eyes that look like fringe.

The fringehead is found off the west coast of the U.S. and Mexico, from San Francisco to Baja California. The fish lives inside abandoned shells and burrows, and even in beer cans, soda bottles, and other trash. Females lay their eggs in these burrows, and the males then guard them.

And they’re good at guarding both eggs and their homes. If anything gets too close, including another male, they flex their bodies and open the covers over their gills. And they open their jaws wide. The jaws are rimmed with fluorescent colors, and they contain a row of needle-sharp teeth. If two males are fighting for territory, they go jaw to jaw. The one with the bigger mouth usually wins, and the loser seeks out new digs.

But the sarcastic fringehead doesn’t just go after its own kind. It will attack almost anything -- including divers. It moves quickly, so it can escape any counter punches. And it doesn’t give up easily. So most other critters move out of the way -- keeping clear of those great big jaws.