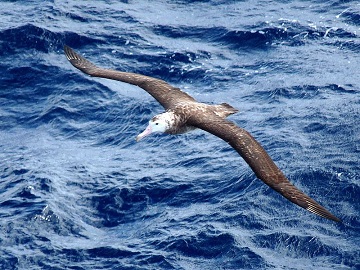 The Tristan albatross is one of the largest sea birds on the planet. It has a 10-foot wingspan, which it uses to soar across millions of square miles of the Atlantic and Indian Oceans. But the albatross nests mainly on one small island in the South Atlantic -- and that’s been a big problem. House mice introduced to the island a century and a half ago are eating the eggs and chicks, and even attacking adults. That’s made the Tristan albatross a critically endangered species.

The albatross is one of many species that lives or nests on Gough Island, which is owned by Great Britain. The volcanic island covers only about 35 square miles. And it’s quite isolated -- Cape Town, South Africa, is about 1700 miles away, and South America is two thousand miles away. The only human inhabitants are the staff of a small weather and research station that’s operated by South Africa.

Yet the island has been a haven for marine birds -- penguins, petrels, terns, albatrosses, and many others. But the mice have been destroying eggs and chicks by the millions. That’s pushed several species close to extinction, including the Atlantic petrel and the Gough bunting, a small land bird.

A conservation group has worked out a plan to get rid of the mice. It was supposed to start in 2020 and eradicate the mice within two years. But COVID-19 pushed back the start until at least 2021. If the plan succeeds, it could make life much more secure for the many species of birds on Gough Island.