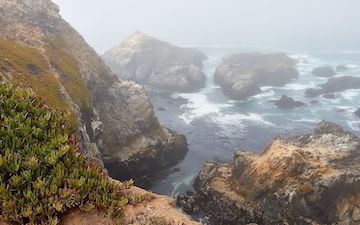 Bodega Bay is best known for its birds. Not real birds, but the scary ones from a movie: Alfred Hitchcock’s “The Birds.” The film was set and shot in the village of Bodega Bay, California, up the coast from San Francisco.

The town is on the edge of Bodega Harbor, which opens into the bay itself -- a body of water that stretches several miles along the coastline. It begins at Bodega Head, a spit of land that’s bisected by the San Andreas Fault. It’s along a region where cold, nutrient-rich waters from deep offshore are pulled to the surface. The nutrients feed microscopic organisms that form the base of a highly productive food chain.

The waters of Bodega Bay are part of the Greater Farallones National Marine Sanctuary. It protects marine life from fishing and other human activities. And the shore is protected by a network of state marine reserves.

One of those surrounds a laboratory operated by the University of California. In recent years, its researchers have studied how sharks use magnetic fields to detect prey, the effects of an invasive crab species on shorebirds, and many other topics.

Scientists have plenty to study in the Bodega Bay area. The waters host many species of fish, along with jellyfish, crabs, shrimp, seals, sea lions, gray and humpback whales, and many others. And yes, there are plenty of birds, too: brown pelicans, arctic loons, magnificent frigatebirds, and Hitchcock’s favorites, laughing gulls -- more than enough to put a scare into anyone along Bodega Bay.