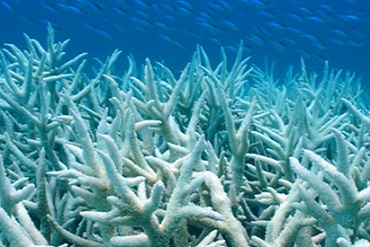 Biologists have identified about 800 species of “hard” corals -- the kind that build reefs. And examples of three-quarters of them are found in a small wedge of the western Pacific Ocean known as the Coral Triangle. It’s home to almost a third of all the reefs on the entire planet.

The Coral Triangle covers more than two million square miles, from the Philippines to Indonesia and east to the Solomon Islands, northeast of Australia. Although that’s a large area, it’s only about one and a half percent of Earth’s surface.

Reefs in the triangle support an astounding variety of life: more than 2,000 species of fish, many species of whales and other marine mammals, and six of the seven species of marine turtles. This abundance has earned the region a nickname: the Amazon of the Seas.

Like most reefs, those of the Coral Triangle are challenged by human activities. They’re damaged or destroyed by pollution and by dangerous fishing practices, such as using dynamite or cyanide. Warmer ocean waters cause “bleaching” events that kill reefs. Climate change also makes the oceans more acidic, which makes it tougher for corals to build reefs.

Some research, though, has suggested that the reefs of the Coral Triangle aren’t suffering as much as those in other areas. In part, that may be because many of the reefs are in darker, muddier waters, where conditions reduce sunlight and slow down the rise in temperatures compared to more pristine waters -- protecting life in the Amazon of the Seas.