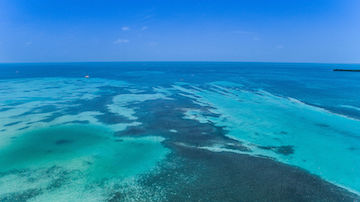 When many people see a dark shadow passing through the water close to shore, they think of one thing: Jaws. Is it a shark, ready to attack unsuspecting swimmers and surfers?

On the beaches of eastern Australia, it’s probably not. Researchers used drones to shoot video along four beaches. And they found that sharks were a rare sight.

Drones are becoming popular tools for marine scientists. The birds-eye view can help them count animals, study water quality and red tides, and perform many other tasks.

Scientists used drones to count large marine animals in New South Wales, a state on Australia’s east coast. Over about two years, they staged more than 200 flights. Each one captured about 20 minutes of video.

The videos revealed about 4400 large animals. The most common were bottlenose dolphins, which showed up in a quarter of the videos. Many of them were playing with each other in the surf, or teasing other animals.

Cownose rays came in second, showing up in 20 percent of the videos. Most of them were in large groups, known as “fevers.” From the air, they formed beautiful geometric patterns.

A few whales showed up, too. But sharks were usually no-shows. Great white, bull, and whaler sharks were seen in less than one percent of the video clips -- making them far less common than most beachgoers might suspect.

The researchers say their work shows that drones can increase our knowledge of the animals that inhabit coastal waters -- helping to protect both human and non¬-human beachgoers.