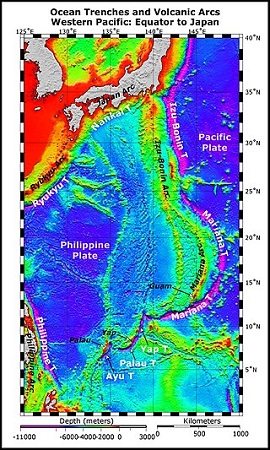 Life can find a niche just about anywhere, from tall mountaintops to the bottom of the deepest parts of the ocean. And it doesn’t stop there. Microscopic organisms live in the sediments below the ocean floor. A recent study found such organisms at depths of three-quarters of a mile, where temperatures were far above the boiling point of water.

The study was part of the International Ocean Discovery Program, which studies all the world’s oceans. Researchers drilled into the sediments at the bottom of the Nankai Trough, off the coast of Japan. It’s a groove in the ocean floor where one slab of Earth’s crust is plunging below another. The bottom is filled with deep layers of sediments deposited in the last few million years.

During a two-month cruise in the autumn of 2016, researchers picked a spot where the water was three miles deep. They then drilled far into the sediments -- almost all the way to the crust. At that depth, the temperature reached about 250 degrees Fahrenheit -- far above the boiling point. Yet even in those conditions, a detailed look at the chemistry of the sediments revealed abundant evidence of microscopic life.

Another study, released in 2020, reported the discovery of 40,000 species of microbes from 40 drill sites around the world. None of the sites probed sediments with such high temperatures, though. But the combination of studies shows that you can find life just about anywhere on Earth -- even far below the bottom of the sea.