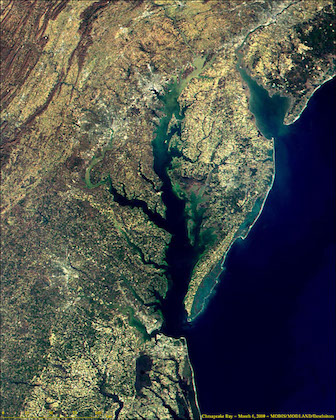 Government regulations and volunteer efforts seem to be paying off, as the Chesapeake Bay “dead zones” are coming back to life. Photo Credit: NASA

Chesapeake Bay appears to be coming back from the dead a little earlier these days. In particular, “dead zones” in the southern part of the bay are ending earlier than they have in the last few decades. That could mean that efforts to protect the bay are paying off.

Chesapeake Bay is the largest estuary in the United States, and is home to hundreds of species of fish, shellfish, birds, marine mammals, and sea turtles. It spans more than 200 miles, from Maryland south to Virginia. It covers about 4500 square miles. And it’s fed by more than 150 major rivers and streams across several states.

Those waterways carry runoff from farms and cities, including fertilizers and other compounds. In late spring, those chemicals feed blooms of algae. When the algae die, they sink to the bottom and decay, consuming oxygen. When there are enough algae, they use up all or most of the oxygen in parts of the bay, creating dead zones. Fish and shellfish die. And so do plots of seagrass, which provide hiding places and feeding grounds for many creatures.

For decades, the dead zones have persisted into late summer. But according to a recent study, over the last few years the zones have revived a little earlier over parts of the bay -- from the Potomac River southward.

Government regulations and volunteer efforts have aimed at trying to improve the waters of Chesapeake Bay for years. And this new study suggests they may be starting to work -- cleaning up a large estuary on the East Coast.