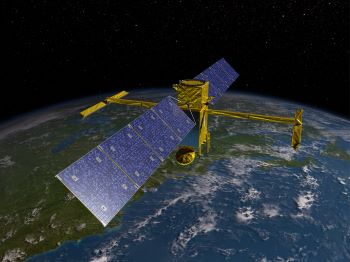 The new Surface Water and Ocean Topography satellite will launch in late 2022 and be the first satellite to record measurements of all bodies of water, salt and fresh. Credit: NASA.

For years, NASA’s mantra for exploring Mars has been “follow the water.” Places with water are the best homes for life, so probes have been looking for traces of water on the planet—past or present.

The agency is getting ready to “follow the water” on Earth in a big way, too. A new mission will study the water across almost the entire planet—the first time that’s been done in a single mission. It’ll map rivers and lakes, and plot tiny changes in the height of the oceans—a measurement that can help scientists understand the role of the oceans in climate change.

The mission is called SWOT—Surface Water Ocean Topography—a joint project of NASA and several other agencies. The craft will orbit almost from pole to pole, so it’ll see 90 percent of Earth’s surface. Its track will repeat every few days, allowing it to record changes in bodies of water.

Using radar, SWOT will not only map the lakes and rivers, it’ll measure their surface height, their tilt, how water flows in and out of them, and more. And it will watch as they change over time.

It’ll measure the height of the oceans with an accuracy of an inch or so—the best global measurements to date. Tiny changes can reveal the motions of currents and the formation of eddies. They can transport heat and carbon dioxide from the surface to the deep ocean, helping regulate Earth’s climate.

So, “following the water” may help us learn about the future of life on Earth.