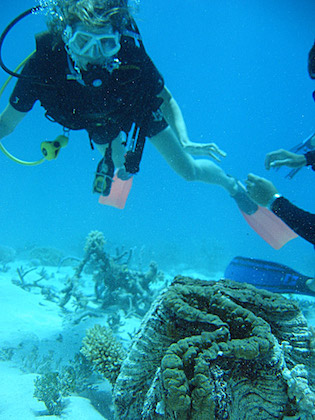 The giant clam has had a bit of an image problem: It’s been considered a killer. The largest species can weigh more than 400 pounds, and it can span four feet. According to legends in the South Pacific and Indian oceans, the clam sometimes drowns divers by clamping down on them with its giant maw.

The legends are just that. The only confirmed injuries by the clams are some strained backs when people have tried to haul them out of the water. In fact, the death toll is one-sided the other way. Some giant-clam populations have been decimated as people harvest them for their meat and their beautiful shells.

Both the sizes and the colors of the shells are the result of algae that live inside them. The clams get some of their nourishment by filtering tiny organisms from the water. But most of their energy comes from the algae. The algae get a safe home inside the shells. In turn, they share some of the food they produce with the clams. There are so many of them that the clams reach giant proportions.

These symbiotes also produce the shimmering colors that make the clam shells popular. The shells are especially beloved in Asia, where they’re used to make jewelry and other decorations.

A recent study found that the largest species of giant clam has been especially hard hit. The populations of some groups have dropped dramatically, while other groups have disappeared. So a creature that once was thought of as a killer is instead being killed off -- vanishing from the world’s oceans.