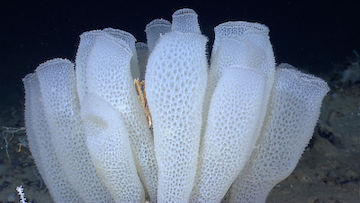 There are many symbols of love, from the heart to red roses. And for some couples in Japan, it’s a glass vase -- the skeleton of a sponge.

Venus’s flower basket is a type of glass sponge. Various species of glass sponge are found around the world, usually in fairly deep waters. The largest concentrations of them form reefs off the coast of British Columbia.

The living part of the sponge filters the seawater for silica -- the mineral that makes up glass. The silica is molded into thin strands, known as spicules. They form the sponge’s skeleton -- a glass mesh that’s quite strong. Water flows in through pores, allowing the sponge to feed on bacteria and tiny organisms.

Venus’s flower basket is found near Japan and in surrounding waters. It forms a flute that’s usually a few inches tall, sealed at the top. The sponge is named for the Roman goddess of love and beauty. That’s mainly because of what’s found inside the flute: a pair of tiny shrimp-like creatures.

The crustaceans enter the sponge when they’re larvae. Before long, they grow too big to squeeze back out of the pores through which they entered. So, they spend the rest of their lives inside the sponge.

The creatures keep the inside of the sponge clean. For its part, the sponge provides food for the shrimp through its wastes. The offspring of the trapped crustaceans are small enough to escape. They head out to set up house in their own sponges, leaving mom and dad behind -- united inside a glass house ’til death do they part.