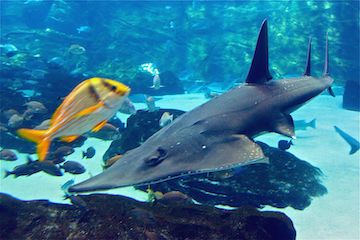 The guitarfish has the characteristics of both a shark and a ray. Photo Credit: GA Aquarium/ Creative Commons Attribution-Share Alike 2.0 Generic

The guitarfish looks a bit like the result of an experiment by a junior mad scientist. The front half is wide and flat, like a sting ray. But the back half is long and tapered, like a shark. Put the two halves together, and look at them from above or below, and the outline resembles a stringed instrument. So the creature is called a guitarfish, although it’s also known as a fiddler ray or a banjo shark.

Biologists have identified about 50 species of guitarfish. They’re found in warm, shallow coastal waters around the world. Most species are no more than a few feet long. But the giant guitarfish can top out at almost 10 feet.

Like sharks, guitarfish swim by moving their tails from side to side. But like rays, they spend most of their time at the bottom. They move along slowly, or simply settle down and wait -- sometimes burrowing into the sand or mud. When a tasty morsel comes by, they spring after it. A guitarfish can trap its prey with its wide head, then use a series of quick jumps to pull it into its mouth.

If a victim struggles it can kick up sand and other solid particles. To protect its eyes from the debris, the giant guitarfish jerks its eyeballs deep into their sockets -- about an inch and a half.

Many species of guitarfish are in decline. Some are caught for Asian markets, for a variation on shark-fin soup. Others are caught accidentally -- they’re rounded up with fish that are the intended targets. That’s reducing the populations of these odd-looking creatures.