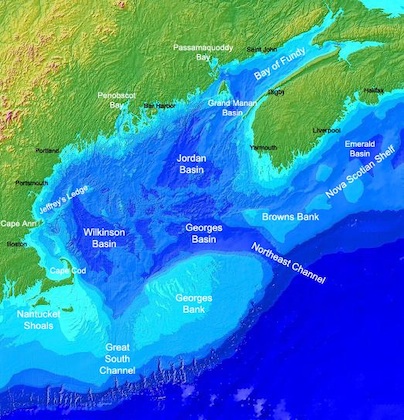 The Gulf of Maine is rising in temperature faster than 99% of all ocean environments. Photo Credit: Creative Commons Attribution-Share Alike 3.0 Unported

For a lobster, hotter water is a bad thing. So not surprisingly, biologists expect the crustaceans to hop out of a rapidly warming pot of water off the east coast of the United States and Canada.

The Gulf of Maine is heating up faster than 99 percent of the oceans. That’s already having some effects on life in the gulf, and more dramatic effects could be on the way.

The gulf stretches from Cape Cod, Massachusetts, to Nova Scotia. It covers about 36,000 square miles. It’s fairly shallow -- no more than 1200 feet deep, with half of it less than 500 feet. It consists of three main basins, plus a series of shallow banks.

For centuries, the Gulf of Maine has been one of the most productive ocean environments. Today, though, it’s facing threats. Runoff from land appears to be slowing the growth of phytoplankton, the tiny plant-like organisms that are a vital link in the marine food chain. Overfishing has been a problem, too.

Now, though, the biggest threat is rising temperatures. That appears to be causing the cold ocean current that feeds the Gulf of Maine from the north to slow down. That’s allowing the warmer Gulf Stream current to become more dominant.

The cod population has declined, forcing bans on recreational fishing. There have been fewer fish for puffin chicks to eat, so their survival rate in 2018 was half that of the year before. And a study says the lobster population could decline by a third by 2050 as the crustaceans head north -- hopping out of the “hot pot” of the Gulf of Maine.