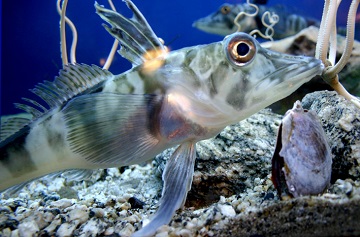 As its name implies, the icefish is cold-blooded. But it’s also clear-blooded. It’s the only known vertebrate in the world that doesn’t have red blood cells -- or the protein that gives those cells their color.

The first icefish was discovered in the 1920s in the Southern Ocean, which surrounds Antarctica. It was called the white crocodile icefish. It has a see-through body -- you can even see its brain -- plus big eyes and a long snout with a lot of teeth, like a crocodile.

Since then, biologists have identified at least 16 species of icefish. The fish grow to a foot or two in length. They mainly eat other fish -- some up to half their own size.

The icefish’s most interesting feature, though, is its transparent blood. It has no hemoglobin -- the red protein that transports oxygen through the bodies of humans and other vertebrates. Without it, the fish’s gills are much less efficient at absorbing oxygen from the water.

The icefish can survive without hemoglobin because it’s not very active -- it sits on the bottom and waits for prey to swim by -- and because of its environment. Temperatures in the Southern Ocean hover near freezing, so the water contains more oxygen than warm water.

The icefish also has a much bigger heart and bigger blood vessels than other fish of about the same size, so it can circulate the blood faster. And its blood contains proteins that act as an antifreeze. All of those adaptations keep the icefish alive and well in some of the coldest waters on Earth.