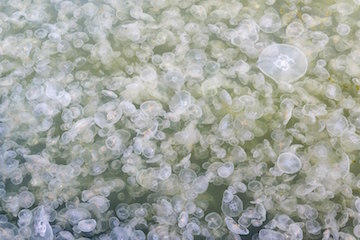 In large amounts, Jellyfish have been known to shut down even nuclear power plants. Credit: A. Savin/ Creative Commons Attribution-Share Alike 3.0 Unported

There are lots of ways to cause a blackout -- storms, mechanical failures, even explosions on the Sun. You can also do it with a few truckloads of jellyfish.

There are more than 1500 species of jellyfish. Many of them are both delicate and beautiful. Even so, the jellyfish can be quite a pest. It can deliver a nasty sting or decimate a fish population. And if you get enough of them, they can shut down major pieces of equipment -- especially power plants.

They do so by clogging up lines that bring in water for cooling. In 1937, they caused a power outage in Brisbane, Australia. And in 1999, they blacked out the Philippine island of Luzon. That plunged 40 million people into darkness, and raised fears of a military coup. Clean-up crews pulled 50 truckloads of jellyfish from the water intake line on a coal-fired power plant.

Since then, jellyfish have shut down quite a few nuclear power plants. They even caused a partial shutdown of an aircraft carrier.

No one is sure whether the problem is getting worse. Jellyfish populations seem to be growing, but there are no solid numbers. Yet environmental trends favor the jellyfish. Overfishing is reducing the number of fish that eat jellyfish. Agricultural runoff from land is fueling “dead zones,” which jellyfish actually like. And shipping traffic is transplanting jellyfish to areas where there are few predators.

All of these factors could boost populations around the world -- making it easier for jellyfish to turn out the lights.