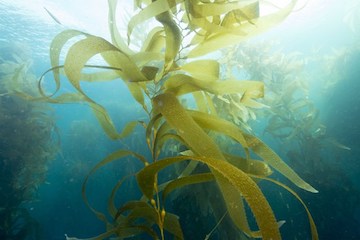 For more than three months, giant kelp off the coast of California bobbed up and down like a pumpjack in an oil field. The goal of that motion was to replace a few pumpjacks by developing a replacement for some of the country’s oil.

Corn and other crops are already used to produce biofuel. But they require land, fertilizer, pesticide, and freshwater. So researchers are looking at ways to produce biofuels using organisms grown in the oceans, including kelp. Although the kelp would release carbon dioxide when it was “burned” as fuel, newly grown kelp would take up carbon dioxide, so the process would basically be carbon neutral.

Kelp is found in shallow waters all over the world. But harvesting natural kelp would disturb fish and other organisms that use the kelp for food or protection. So scientists are looking at ways to grow it away from the coast, in the open ocean.

And that’s where the “bobbing” comes in. Researchers built a gridwork of pipes for the giant kelp to attach to. They then placed the platform off Catalina Island, near Los Angeles. During the day, the platform stayed near the surface, providing plenty of sunlight. At night, it dropped to a depth of about 250 feet, immersing the kelp in nutrient-rich waters.

The kelp grew by up to two or three feet per day -- much faster than patches that were grown in a more natural kelp environment, close to shore. More tests are being planned. If they work out, they could lead to full-scale kelp farming -- and a new source of energy.