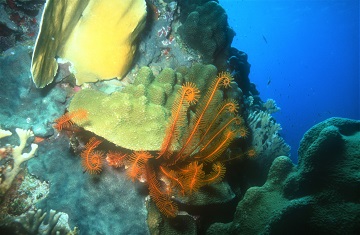 Crinoids are some of the oldest sea creatures. They are related to sea stars and sand dollars. Credit: Steve Herrick

Sea lilies and feather stars are some of the most beautiful and delicate creatures in the oceans. Many of these animals resemble feather dusters, with the “feathers” colored orange, yellow, green, or other hues.

They’re also among the oldest sea creatures. Their ancestors date back hundreds of millions of years. Because of that, they’re sometimes called “living fossils.”

Sea lilies and feather stars are crinoids. They’re related to sea stars, urchins, and cucumbers. There are about 600 species in all.

Feather stars are the most common crinoids. They can swim through the ocean or crawl across the bottom. They’re typically found in shallower waters -- often around coral reefs. Sea lilies, on the other hand, are anchored to the bottom by long stalks. They’re more common at greater depths.

Both varieties have five arms. Each arm has many “branches” that look like feathers. Small structures on the feathers gather tiny organisms and other food that’s carried by the currents.

Crinoids are common in fossils dating back at least 480 million years -- and perhaps more than 500 million years. The fossils have been found all over the world.

Crinoids almost died out about 250 million years ago, during the biggest mass-extinction event yet discovered. Only a few species survived it. So Crinoids aren’t nearly as abundant today as they were in the distant past. But they still survive -- “living fossils” scattered through the world’s oceans.