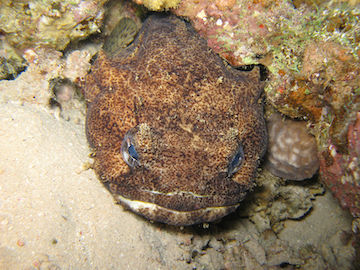 It’s probably not surprising that a critter known as a toadfish can be a bit rude. A couple of studies in recent years have found that male toadfish “grunt” when their neighbors are trying to court females. That makes a neighbor’s call a bit less attractive -- perhaps giving the grunter an advantage in finding a mate.

The studies targeted a species of toadfish along the Atlantic coast of Central and South America. It lives in shallow coastal waters, in areas with rocky or sandy bottoms.

The toadfish isn’t much to look at. It has bulging eyes, a wide head, and warty-looking skin. Males are good fathers, though. Unlike most fish, they guard the juveniles against predators.

The males begin their courtship ritual by making burrows in rocky ledges or empty shells. They then emit a series of calls to attract females. The low-pitched calls are quite loud. A “chorus” of them produced by many toadfish can overpower the sounds of other creatures.

Researchers at the University of Texas studied the sounds produced by male toadfish along the coast of Panama. They found that the fellas tried to sabotage each other -- they grunted over the calls emitted by others. And they responded not just to the sounds of the closest competitors, but to the entire neighborhood. So when the fish were closer together, each one made even more noise.

That suggests that how tightly packed the toadfish are is just as important as how many there are in determining how noisy the toadfish will be.