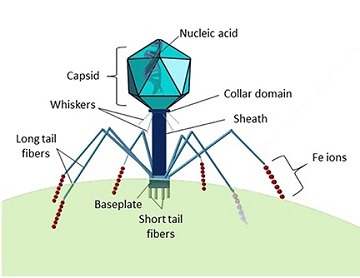 Structure of the type of virus that most often affects bacteria. Credit: Chelsea Bonnain, Mya Breitbart and Kristen N. Buck

If you swallow a mouthful of seawater, you’ll down a good supply of minerals, the wastes of lots of marine creatures, and tens of thousands of bacteria. And for good measure, you’ll get millions of viruses. Fortunately, they’re not likely to be harmful to people. But they can have a big impact on marine life.

Viruses are by far the most abundant living organisms in the oceans. A study released in 2019 identified almost 200,000 types of marine viruses -- and few of them had ever been seen before. They were split into five major groups, generally based on their specific habitats. But many types were found around the entire planet.

Viruses affect all forms of marine life, including fish, crustaceans, and mammals. Most of them infect the smallest organisms, though, such as bacteria. They kill off a large percentage of these little guys every day. In many cases, though, the viruses take their time. They may even help the host organism produce more energy. That gives the virus more time to reproduce.

In some ways, though, viruses have a positive impact on life in the oceans. When tiny organisms die, for example, they release nutrients for other critters. And viruses pass genetic material between bacteria, boosting their diversity.

Most of what we know about marine viruses has been compiled in just the last few decades. But scientists say that most viruses in the oceans probably haven’t even been discovered yet. In fact, there could be millions more species lurking in the ocean depths.