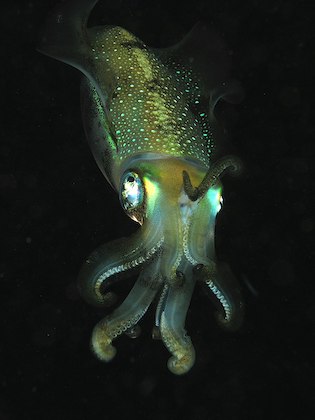 The squid has the biggest nerve fiber in all the animal kingdom. Photo Credit: Nhobgood/ Creative Commons Attribution-Share Alike 3.0 Unported

The squid has quite a nerve. In fact, it has the biggest nerve fiber in the animal kingdom -- a thousand times wider than the typical human fiber. That’s made the squid a good subject for learning about how nerves work -- and how they can misfire.

The massive squid nerve fiber is known as a giant axon. It forms a ring around the creature’s esophagus, and it’s protected by a hard cap. The axon is up to a millimeter wide.

Its function is to help keep the squid alive. It’s part of the creature’s escape mechanism. When the squid sees or otherwise detects a threat, the giant axon triggers a reflex. The squid squeezes its body, shooting out a jet of water. That propels the squid out of harm’s way. The bigger fiber carries more information more quickly, so the squid can react faster.

Biologists first studied the giant axon beginning in the late 1930s. Alan Hodgkin and Andrew Huxley implanted electrodes inside it -- the first such experiment with any nerve fibers in any organism. From that, they developed models of how electrical signals are created, how they travel through the nerves, and how they control movement. Their work earned Hodgkin and Huxley a Nobel Prize.

Since then, the squid giant axon has helped many other researchers. They’ve studied how nerves get “clogged up,” for example, leading to Alzheimer’s, dementia, and similar brain diseases. And they’ve studied how certain chemicals can change brain functions. So, the “nervy” squid is teaching us a lot about our own minds.