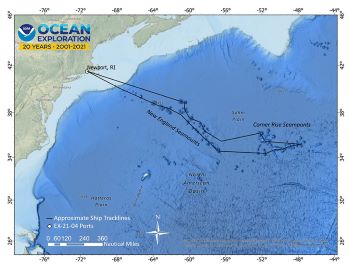 About 30 extinct volcanos, some more than a mile and a half high, form a chain of underwater peaks off the coast of New England. Credit: NOAA Ocean Exploration, 2021 North Atlantic Stepping Stones: New England and Corner Rise Seamounts.

The White Mountains of New Hampshire have some relatives on the bottom of the North Atlantic Ocean: extinct volcanoes that were built by a “hotspot” below Earth’s crust.

The underwater volcanoes form the New England Seamount. It’s a chain of about 30 peaks. It begins a couple of hundred miles from Cape Cod and extends hundreds of miles eastward. Its tallest peaks rise a mile and a half from the sea floor.

The peaks were built when one of the plates that make up Earth’s crust slid over a hotspot below the crust. Molten rock pushed upward, building the mountains. The White Mountains in New Hampshire took shape about 125 million years ago, with the seamounts coming later. The last of them was formed about 80 million years ago.

An expedition in the summer of 2021 used sonar to map a large region of the seamounts. It found some new peaks, and discovered that an expected one wasn’t there.

The expedition also used underwater robots to look at the seamounts up close. It found that the summit of one was completely covered with small balls made of iron, manganese, and other metals. And it found an abundance of life: corals, fish, jellyfish, sponges, crabs, and many other creatures. Some of them were species that no one had ever seen before, such as a brilliant red jellyfish.

There’s still a lot to learn about the New England Seamounts. But we know a lot more than we just did a few years ago—about these hidden relatives of the White Mountains.